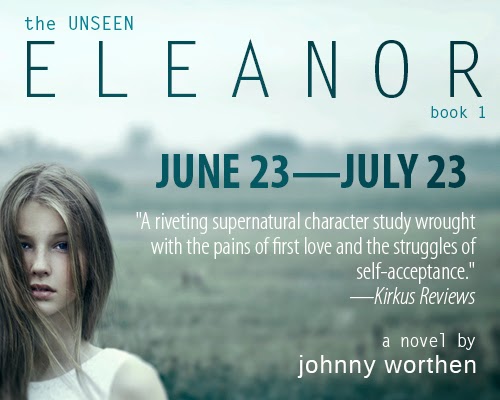 Time for another blog touring author to stop by for a visit. Today I have the privilege of hosting Johnny Worthen, author of Eleanor, The Unseen coming July 1 from Jolly Fish Press.

It was a gamble for Eleanor to rejoin humanity, but she was driven to it. She’d been too successful forgetting. The last vestiges of her family hung by a thread in her transformed brain and drove her to be reckless. Ten years later, Eleanor hides in plain sight. She is an average girl getting average grades in a small Wyoming town: poor but happy, lonely but loved. Her mother, Tabitha, is there for her and that’s all she’s ever needed. But now her mother is sick and David has returned. The only friend she’d ever had—the only other person who knows her secret—is back. And Eleanor again becomes reckless.

Eleanor is a modest girl, unremarkable but extraordinary, young but old, malleable but fixed. She is scared and confused. She is a liar and a thief. Eleanor is not what she appears to be.

Johnny is one of my fellow Utah Fantasy Authors and I twisted his arm to give me a copy of Eleanor before anyone else could read it because… hello, you all know I’m not a patient woman! This book grabbed me quick and fast; despite the fact it is touted as juvenile fiction, which I rarely read. I’ve said it before, and I’ll say it again for the record: Johnny Worthen writes books I like to read.

Eleanor is the story of a girl who is not what she appears. You think you know her story, or at least the biggest piece of it, from the opening scenes – scenes that are so well written they pulled me in and had me thinking about the hinted mystery immediately. But as it unfolds, you learn that what you think you know might only be the surface of what is really at the heart of Eleanor – a smart, feisty girl trying to hide in plain sight. She knows little about her true nature and what she does know she loathes. This book masterfully captures the feel of growing up in a small town where everyone knows everyone and they all think they know what the real stories are. It is also a great story of the bond between mother and daughter and between trusted friends. It is a unique paranormal coming of age story from the mind of a fantastic storyteller.

If you love a good mystery, are a sucker for the paranormal, like to ask yourself “what if” questions, and in general like reading well-written books, then this one is for you. It is an entertaining story for any age that doesn’t limit itself to adult readers. I would let my daughter read this one, and so should you.

I asked Johnny to visit with a guest post about how he creates such amazing and well-rounded characters since it is something he consistently does well in his work. Enjoy...

**********************
Each story begins with an idea of a theme I explore, a question or a specific conflict. To this I identify the forces I’ll need. These are the agent and the character. They are born out of function. This is the seed.

I nurture this seed and sink some roots. For the character to function as I would like, it is already in motion moving toward the goal I have in mind. I imagine what their past was that put them on this trajectory. This is their background and history and I usually outline it loosely allowing myself space to connect and rearrange but always having the framework to justify the rest.

If I haven’t already named the character by then I’ll name them at this point. I knew ELEANOR’s name before I knew her story. She introduced herself and we worked it out together.

Naming is a huge issue for me. I’ll let you in on a secret. I often use puns to identify the character’s function and core. This is to remind me of what the character is about and also to leave a clue for the reader, something to write an essay about in English class. I often conceal this by translating it into another language.

Not all of my characters have this, but many of them do. My signature character is Tony Flaner, a slacker detective who you won’t meet until next year in THE FINGER TRAP. The pun there is from the French, “Flaneur” – wanderer.

In ELEANOR, THE UNSEEN, I’d direct you to David Venn. I speak Danish. I was an exchange student there. “Ven” in Danish means “friend.” It’s as simple as that. Similarly, Eleanor’s last name is Anders, a common enough Danish name. Think Anderson, but it’s also related to “ændring” which means “change.” These linguistic clues help me to conceive of the character’s core as they develop.

The next thing in character development is their voices. Even before I think I know what they look like, I need to know what they sound like, both inner and outer dialog. If I can’t hear them, if I can’t put them in a room with each other and have them carry on a conversation, they’re not ready yet. If this happens, I know I need to go back and fill in some more of their back-story, remember who they are and what they want. Flesh them out with the usual prompts; internal and external conflicts, habits and mannerisms, occupation, family, etc. I’ll assign them some details even at random just to get a handle on them.

The final and ultimate test for me is always the conversation. When I’m stuck in a book, I often just put the right characters together and get them talking. It’s magickal, and I don’t use that word lightly. The characters will interact, push their agendas, move the story themselves, react, plot and plan. Maneuver and tell where the story needs to go. When this happens, I just have to take the dictation. I’m out of it. It’s alive. That’s when I know my characters work, when they can do that.

Thank you for that insight, Johnny! I loved getting a glimpse inside your mind. Thanks for stopping by on your blog tour.

If you'd like a chance to win a copy of Eleanor (and you know you do!) enter the blog tour giveaway a Rafflecopter giveaway

If you'd rather have the instant gratification, instead of waiting to win, you can get your copy online:

JOHNNY WORTHEN graduated with a B.A. in English and Master’s in American Studies from the University of Utah. After a series of businesses and adventures, including running his own bakery, Worthen found himself drawn to the only thing he ever wanted to do—write. And write he does. When he’s not pounding on his keyboard or attending writers conferences, Worthen spends his time with his wife and two boys in Sandy, Utah.

Great piece on characters, Johnny. And great post, Terra. I'm in for a signed copy!

City of Bones
by Cassandra Clare

Slim for Life: My Insider Secrets to Simple, Fast, and Lasting Weight Loss
by Jillian Michaels

Happy Money: The Science of Smarter Spending
by Elizabeth Dunn

The Alloy of Law
by Brandon Sanderson

The Ocean at the End of the Lane
by Neil Gaiman

The Light Between Oceans
by M.L. Stedman

Writing Projects - What I'm Up To

Novel 3 (No title yet) Pre-writing prep/plotting